Roundabout repairs at the end of June

The Queen Edith's Focus Team standing for election on 6th May

Ready for the referendum? 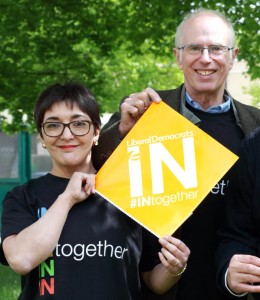 A vote in referendum requires your family and friends to be registered. The last date to register is nearly here (next Tuesday); you can download the forms both for registering and postal votes on line on the Government’s elections website. I’ve been reminding my busy nephews and nieces, several of whom have not yet registered. The EU and their futures are entangled, perhaps?

Still confused? The EU and its web of associated treaties are too massive to boil down into a binary In or Out: too much hyperbole and downright misunderstanding, misrepresentation and outright falsehood are abroad. I spoke with an MP who swore that the EU was not democratic because we, in England, can’t vote out the top EU civil servants! It’s the economy, stupid.

Part of the trouble is that projections (models extrapolating existing data into the future, with assumptions) are being claimed as ‘facts’ (that grow larger and more fantastical each day). We know the wealthiest open market both makes us wealthier and saves us money, but exactly how much, and what impact would leaving have? We receive over half of all international investment into the EU, creating jobs and exports — how much of this will remain should we leave?

We can’t blame all our woes on the EU — I’ve heard housing shortage, NHS woes, no school places and the kitchen sink blamed on the EU.

Another consideration is the significant range of services and benefits the EU provides for us and of which we are frequently ignorant and so do not value — drug and chemicals evaluation and licensing included. There will be cost to us if we lose these, but how much?

And there is no Leave strategy to evaluate, with many false and untested claims that the EU will have our trade back without cost to us — EU leaders have stated otherwise. There are assertions that all will be fine, when we know the probability is that we would be in for a bumpy ride … but we don’t know how bumpy or for how long. Negotiating hundreds of trade deals is not a trivial task which will take many many years, and what EU barriers will be erected for our world-beating service sector in the City?

How can you put a price on the human and workers’ rights and equalities legislation, and the green and environmental benefits that come as part of the open market?As for migration, this city is reliant on migrants — look at the proportion of the EU scientists working in Cambridge University and the NHS reliance on skilled EU professionals — migrants more than pay their way and are one reason why our economy has been growing. Cambridge University, big science, receives 17% of its funding from the EU.

In reality we have never had migration-proof borders, not in recorded history. We are not fulfilling our legal requirement to accept genuine refugees (one of over 600 other treaties that impinge on our Parliament’s freedoms).

Putin wants us out; perhaps that sums up the impact we  are having in the EU and the peace dividend of standing together: soft power, effective economic sanctions to bolster NATO’s hard edge.

Who rules us some say it is the EU? (see appended Council Of Ministers PDF). Anyone know a reliable mystic? (…would I trust your recommendation?) Council of Ministers

There are a couple of websites useful to debunk the hyperbole and say it as it is.

In Facts is great fun, and to the point. Lord Sugar’s  with-no-fluff Full fact site  is pedantic, checking each claimed ‘fact’ for evidence (so few tick the purely black or white only boxes but the effort is valuable, honest and shows a nuanced fact based picture).